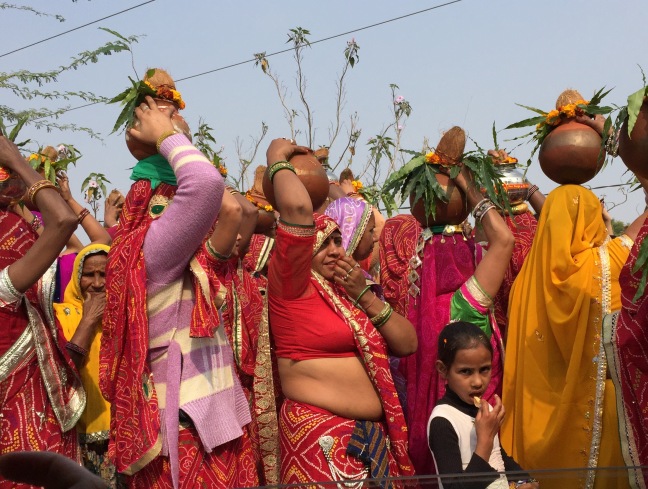 The big excursion for the day, and something I had been looking forward to for quite some time, was a visit to an elephant sanctuary. But before I describe my time with the elephants I must talk about an unplanned experience that in retrospect almost supersedes my excitement about the pachyderms.

In a small village outside Jaipur, on a dusty dirt road leading to the sanctuary, we encroach upon some sort of small parade that takes up the entire width of the single lane path. Dozens of women are slowly trailing behind a large flatbed truck that blares festive music. They are dancing and singing and throwing flower petals in a flurry of color and song, many of them precariously carrying ornate golden, silver or copper bowls atop their heads.

From the car we watch the women revel while the surrounding men and children hold flags and banners that sway to the music, joyfully supporting these women in their celebration of what, we’re not sure. Our driver tries to explain but the language barrier prevents us from getting much detail, and although we didn’t understand what this was all about, that seemed entirely beside the point. The joy of simply watching them was overwhelmingly infectious and I felt privileged just to be witness.

Then, our driver asked if we wanted to join.

Personally, I had a split second moment of questioning whether or not it was appropriate to interfere, as we had been able to discern from the driver that they were heading toward the temple, but it quickly became apparent that any feelings of intrusion I had were of my own conjuring. These smiling, laughing, dancing women pulled us in, twirled us around and showered us with love. The warmth and joy they extended us was nothing short of pure magic. 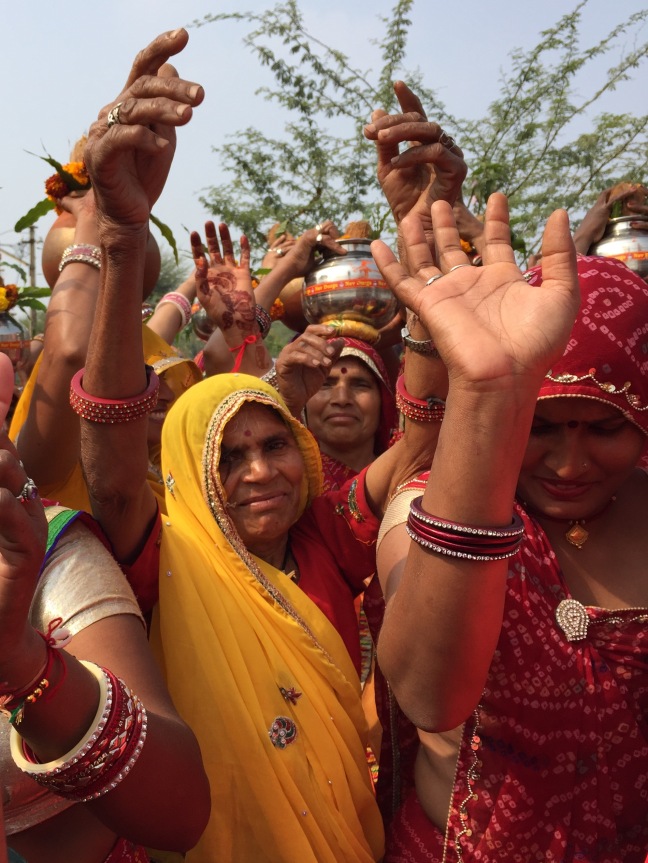 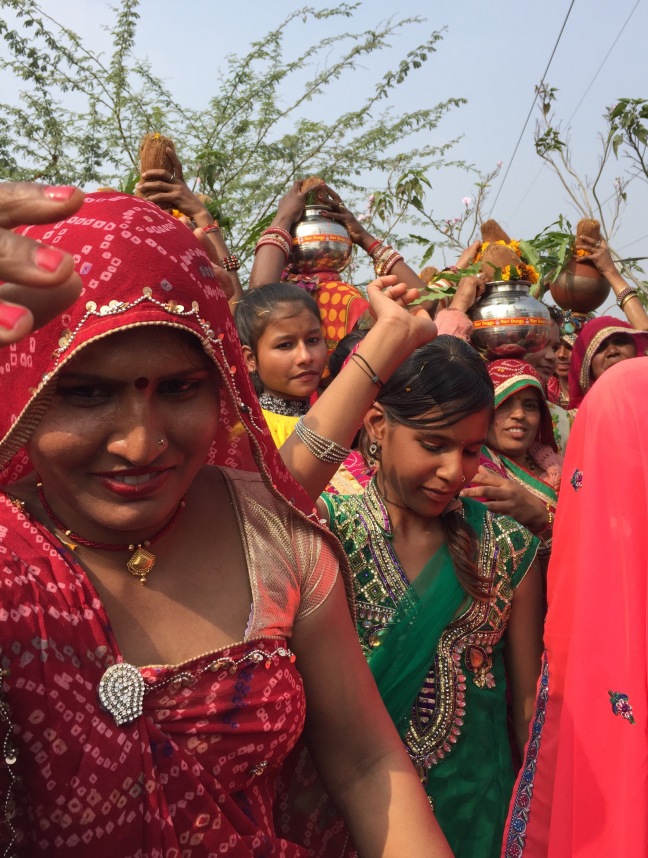 After 20 or more minutes of dancing in the midst of these joyous women our driver kindly insisted we proceed to our destination, but it became obvious after repeated attempts to keep us in their circle, that if these women had their way we would have accompanied them the entire way to the temple… we were their guests and it was as much a pleasure to share this experience with us as it was for us to experience it with them. 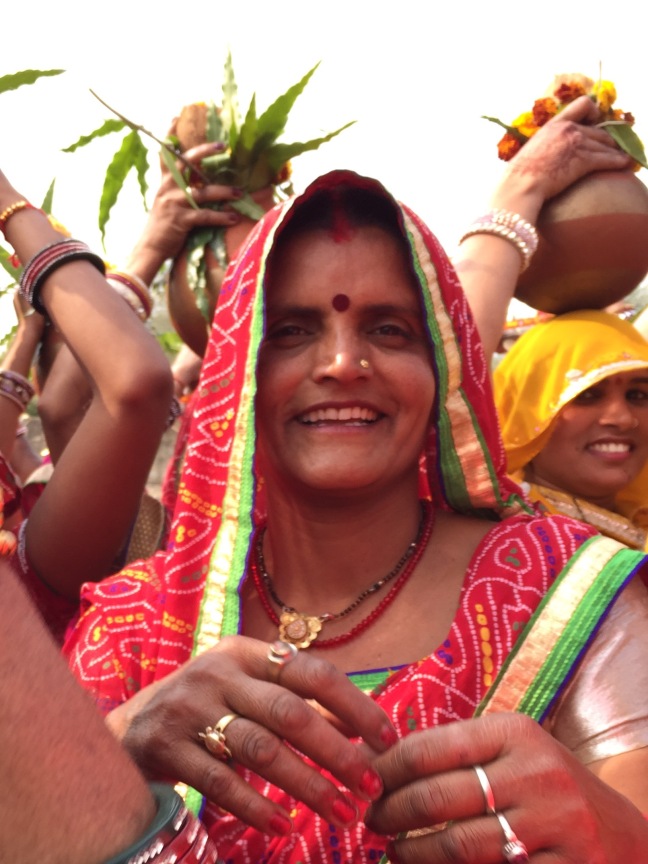 It was, without question, a half hour of my life that I will never, ever forget. That kind of joy has a way of embedding itself deeply and permanently into your heart.

From where we leave the dancing ladies it is a quick ride to the elephant farm, Elephantasic. Before describing my time with these incredible creatures I have to spend a couple of minutes addressing the question that was most prominent in my mind as I was planning, and a concern that I know many others share as well, and that is the question of ethics.

India is a country steeped in old world tradition and the domesticated use of these wild animals has been around for a very long time. With domestication and service, the doors to mistreatment and abuse also open, and so I will simply echo the voice of many, who know they would like to take the opportunity to visit with these animals in countries where that is an option, but in no way want to support any organization that perpetuates mistreatment of any kind.

I personally have declined visiting elephant farms in other countries because I wasn’t comfortable with the information I was getting, and I approached Elephantastic with the same sort of skepticism. But after digging extraordinarily deep for information, everything I came up with seemed to support their claim of being a true sanctuary where elephants who no longer work come to rest or retire. 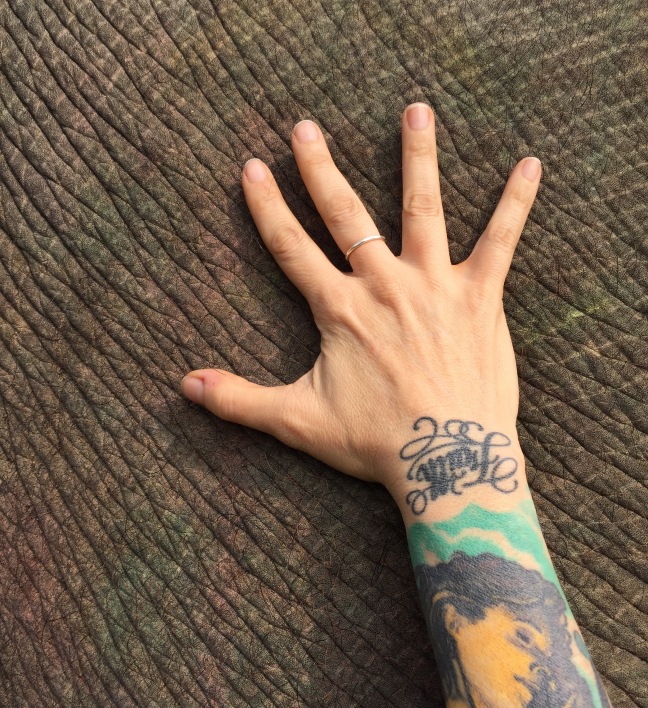 I must interject here, however, that if there is a single emphatic lesson to be learned in India, it’s that there is always more to the story and that your are nearly always being sold a bill of goods on some level, particularly as a tourist since our dollars spent here are extremely valuable.

So after hearing conflicting information from our driver that brought us to Jaipur (not the driver bringing us to the sanctuary, as he worked for the farm) we vacillated back and forth on whether or not to even go, but after doing yet more research the night before we were scheduled we (obviously) decided we needed to see it for ourselves.

There is no question that the four hours we spent here were absolutely incredible. We were paired with our own elephant, 19 year old Ahnoo, and being this close to a creature of this magnitude was more than I could have imagined. The first several minutes are spent letting her get to know us by sight, sound of voice and smell. We feed her and stroke her, letting her unique texture become familiar under our skin. It’s nearly impossible to describe. 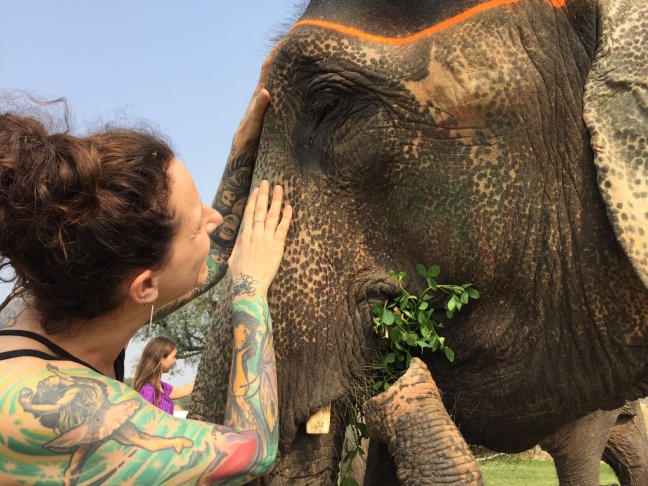 After a good hour or more of feeding and bonding with her we are offered the opportunity to paint her using all natural glycerine paints. Painting is an old tradition, decorating the animals for weddings or other religious ceremonies. This little activity ends up being much more difficult than it looks given not only the perpetual swaying of the animal and texture of her hide, but the course hair all over her body, which ends up flicking nearly as much paint on me as I got on her. 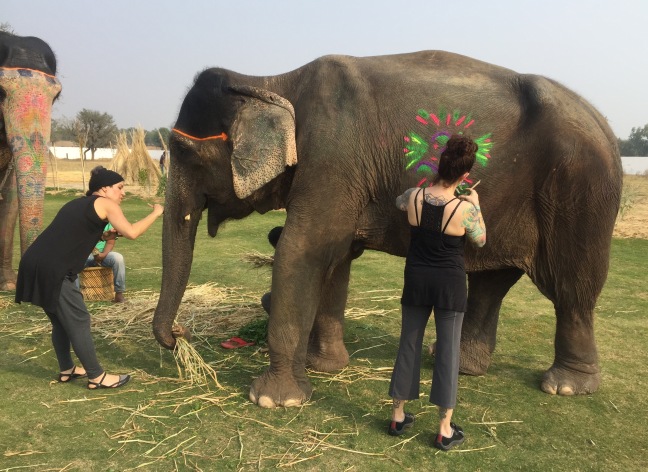 We then wash her off and give her water to drink, which is pretty incredible. She takes in massive amounts through her trunk to then deposit in her mouth, part of which she drinks and part of which she stores for later.

For me, this was a meditative, almost transcendent experience. Sitting atop such strength in motion, I closed my eyes and just let myself be swayed by her gentle movement, feeling her power underneath me. It was like a dance, being led by enormous grace and beauty.

It’s hard to describe the idea of an elephant “nuzzling” but all through this experience and particularly after I’d ridden her, there were moments of undeniable connectivity. When leaning my forehead against her at the space between and below her eyes where her trunk begins (this is where we connected given her “small” stature) and feeling her slowly and gently push back into me, well nuzzling is the only word that comes to mind. Their social nature is apparent and it’s easy to see how humans bond with these intelligent beings.

At the end of it all, I have to admit my take-away is conflicted. I believe they are in fact treating the animals that live here with great respect, but from what I can discern there are many elephants who still work and who come and go from this place, so their welfare when not here is unknowable. Ultimately, there is just no way to get accurate information about what goes on behind the scenes here at Elephantstic or at any tourist-involved activity in India for that matter, but I do believe they are in the right path with good intention.

The good news is, India has begun a ban on using elephants at any tourist sites and they have already shut down circuses here as well, so change IS happening. These animals were born into domestication so the best we can pray for is that they are being treated with the great respect they deserve… and that eventually their domestication here and in other countries will end so they can remain in the wild where they belong. Meanwhile, I feel immense gratitude for this experience and leave taking a little piece of Ahnoo with me in my heart.

꧁Beautiful KAP session videoed at the end of another extraordinary retreat.
ꨄ This is what spontaneously happens when you take a group of people dedicated to their spiritual growth to a secluded beach for a day of integration…
❥ Join me for another KAP Intensive: 1/2 Day Online Workshop.