Everyone recognizes the incredibly picturesque karsts of Halong Bay… those limestone peaks that jut skyward from the water creating a landscape unlike any other… and like the millions of other tourists, I wanted in on that beauty.

But my aversion toward crowds led me to do some research, and upon careful consideration I instead chose to visit Tam Coc, a small village about two hours south of Hanoi that is affectionately known as the ‘Inland Halong.’ Blessed with the same magnificent limestone karsts as Halong Bay, but accented by ribbons of river that weave through the area, the surrounding villages and numerous historic temples give me much to explore… more so than if I’d been isolated on a tour boat up in the bay.

To my delight, aside from the ridiculously beautiful landscape, there were very few tourists around, and in exploring the area I often found myself enchantingly alone in this magical land, save for the locals going about their daily routine. Tam Coc is near the hub of Ninh Binh, where most visitors to the area stay, but in congruency with my solitary tastes, I found a glorious little, luxuriously-bent lodge out in the middle of nowhere.

The end of November being the beginning of cooler weather was partially responsible for the magnitude of quiet, and there were overcast skies for most of my three days here, however I found the moody clouds to provide spectacular light and I felt like a giddy child when one afternoon, rather far from my hotel, the skies opened up on me and I had to bicycle back in a heavy downpour.

The region is filled with fantastic, ancient temples, a few dating back to the 12th century… some of them nestled deep into a mountainsides along with caves to explore and hidden trails to discover. 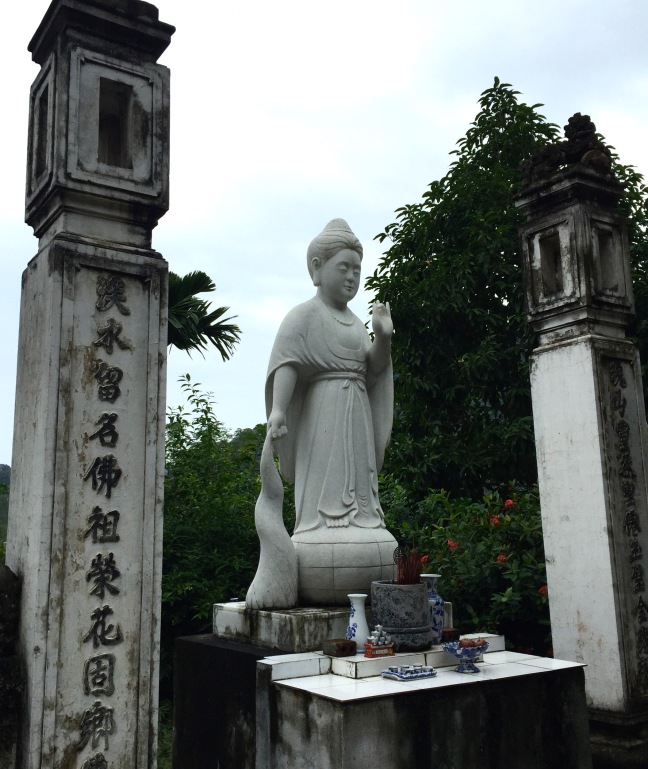 High above one such pagoda lay an ascending rocky path, at the start of which was a sign that simply said “climb.” And so I did. As the path got less defined and the rocks got more precarious, I stopped a couple of times thinking perhaps this was as far as the path was meant to go. But in my eternal quest to uncover the road less traveled (both literally and metaphorically) I carefully (and much less gracefully) emulated the mountain goats I spied across the way and set my sights higher.

And for my persistence I was rewarded handsomely… reaching a crest that held a 360 degree view of the entire valley. This, is my kind of sightseeing.

As has frequently been the case on this trip, some of my most intriguing and enjoyable experiences have been interacting with the locals, and my experience here was perhaps the most moving of all.

Wandering the rural byways on my bike I saw a beautiful pond-side pagoda I wanted to photograph and in trying to get closer, I wandered onto this woman’s property.

Realizing what I’d done, I gave her a nod of apology and started heading back toward the road, but she called to me, motioning for me to come with her. Unsure of what was happening, I cautiously followed and for the next hour was charmed over and over again by this sweet stranger who wanted nothing more than to show me around and share some of her life with me.

She showed me her tiny puppies and her big pigs and the pagoda I had wanted to see, which was a tomb for her father. She plucked fruit from her trees for me and offered up sweet wafers, baby bananas and even woke her napping husband who was good-humored and graciously made us tea. She showed me pictures of her children and I showed her a photo of mine. It was incredibly endearing.

How extraordinary, to unexpectedly sit in this woman’s home and view a piece of rural Vietnamese life through the lens of her hospitality. She spoke no English and I spoke no Vietnamese, and yet somehow we were able to share bits of ourselves with one another. Even when the words made no sense, the smiles and laughter told all there was to tell.

With the afternoon growing late, I had to take my leave so as to not get lost on my way home in the dark… and still, while walking me to my bike she explains on about catching fish in her lake and making a dish that involved wrapping the fish in banana leaves, and I’m quite certain that if I could have stayed she would have cooked it for me!

We hugged and laughed, and I would have given anything to have been able to express my gratitude in words she understood, but took solace in knowing that the tears glittering my eyes and the smile lighting up my face was expression enough. And so with a bicycle basket full of gifts I made my way down her drive toward the road, exchanging goodbye waves along the way.

Honestly, this was one of the most beautiful experiences of my life and if I hadn’t lived it I might not have believed it as truth. Even as I write this, my heart continues to overflow…

4 thoughts on “Deep in the Flow – Tam Coc, Vietnam”

Saying goodbye to the magic that is Ubud and forming ideas about my return... 💚 . . . #ubud #bali #art #culture #sculpture #spirituality #iconography #ricefields #flora #greenery #moodyskies #beforetherain #mothernature #harmony #peaceful #powerful #thunderstorms #divinefeminine #shakti #prakriti #beauty #faith #devotion #travel #experience #liveyourbestlife
This afternoon I had plans to sit by the pool and indulge in some more outdoor spa action ~ but the universe decided otherwise. And you know what? Sitting next to Buddha, sipping on hot cacao, sitting and watching the rain come down in sheets, listening to the roar of thunder and being lit up by it’s accompanying bursts of lightning was just delightful. 🖤 . . . #mothernature #shakti #divinefeminine #sheknows #surrender #divineplan #alwaysinaction #tranquility #santosha #contentment #buddha #ricefields #ubud #bali #rainstorms #thunderstorms #rawpower #prakriti #kali #goddesses #beauty #planB #alwaysagoodplan #gratitude
I have a ritual. Every trip I set aside some of my money so I can indulge in a decadent spa day. Needless to say, with all my travel I’ve had a lot of spa treatments in a lot of places. But today was one of the most gorgeous, blissful, nourishing and enjoyable experiences to date. ~ Five Elements is not just a spa... it’s a spiritual, holistic wellness center that happens to be gorgeously luxurious, assisted by the lush rainforest surroundings and the ever present sound of the river running by just below. ~ The gourmet raw food restaurant did not disappoint and the delicious, organic products used for my massage, scrub and ritual bath were just exquisite. My only regret is that I didn’t come here earlier... but that clearly leaves me with something to look forward to next time. And there 𝕎𝕀𝕃𝕃 be a next time... . . . #bali #ubud #fiveelements #shakti #ritual #indulgeyourself #nourishyourself #mind #body #spirit #morealivethanever #travel #experiencesoverthings #everytime #gratitude #blessed #livingmybestlife