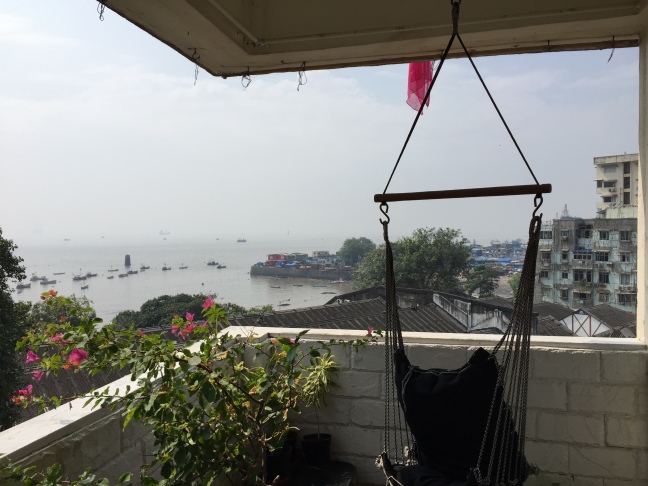 Wow. People talked. I listened. Everyone said Bombay would be intense. Overwhelming. Crazy. And yet, other peoples experiences are exactly that. You have to have your own, in order to understand.

Driving through the streets of Bombay, even from the safe confines of my taxi (if you can call one harrowing, near-miss collision after another ‘safe’) is sort of like being dropped into a blender. Everything moves very quickly in total chaos, and it is impossible to tell where one sight/sound/person/animal/noise/vehicle ends and another begins.

It is somewhere around 11:30pm and I am making my way from the airport to my room in South Bombay. It is still 90 degrees outside, and about 200% humidity, although the rain that just started does bring a strange sort of freshness to the air as it mingles with all the other smells.

The traffic in Bombay can only be described as… insanity. Traffic lights exist but are more of a suggestion as to whom should slow down rather than a means of order, as they were intended. And while the incessant horn honking is humorous, it’s clear that it is also a courtesy… a quicker, more effective way of yelling “get the EFF out of my way or risk losing life and limb!” Still, I am grateful to be just an observer and from the back seat there is plenty to observe. I wish I had photo’s to share, but despite the congested streets, we are still moving at a frightening pace, making picture-taking impossible… which is actually fine. It is one of those moments when you just have to be present and let the experience happen in order to fully absorb it all.

What I noticed more than the traffic and general chaos during this 45 minute ride, are the people. For starters, they are everywhere. No really. The density of population in this country is at once palpable and very apparent. People are literally  e v e r y w h e r e. They are darting through traffic on foot and they are piled up on the back of motor-bikes. They are laying in groups on the dirty sidewalks, sleeping, talking, eating. They are digging through garbage on the streets and they are standing in their doorways, music blaring. They are very old and very young. The teens are boisterous and the tiny children, naked. Most of the adults are dressed traditionally, some more modern. They are busy, even at this hour, cleaning, preparing food, sorting goods for the next day, socializing. I try to take in as many faces as I can while we zip by, wondering at the life-story attached to each one. It is hard to comprehend.

At last, after 36 hours of travel culminating in a taxi driver that had less of an idea about where I was going than I did, I found my room (and said a little prayer of thanks to the nice English-speaking locals who helped me interpret the instructions to the driver.)

The building, the neighborhood… none of it is what I expected, and yet I say this not really knowing what I did expect. I am overwhelmed, over-stimulated and admittedly, a tiny bit nervous. I am exhausted, but I am also exhilarated. Sleep seems unimaginable and yet entirely necessary.

Toto, I’ve a feeling we’re not in Kansas anymore…

꧁ Can’t. Get. Enough.
KAP is a direct energy transmission that ignites the divine awakening process within... clearing out old blockages and ushering in higher states of consciousness.
If you had told me a few years back that I would become a vessel of the divine - an enabled instrument that shares and transmits energies which are helping heal the individual while directly raising the collective levels of consciousness on this planet - I would not have believed you.