Most of these photos are the stereotypical shots everyone takes, and that is unavoidable… but I assure you there is not a single thing about this iconic structure that is typical. 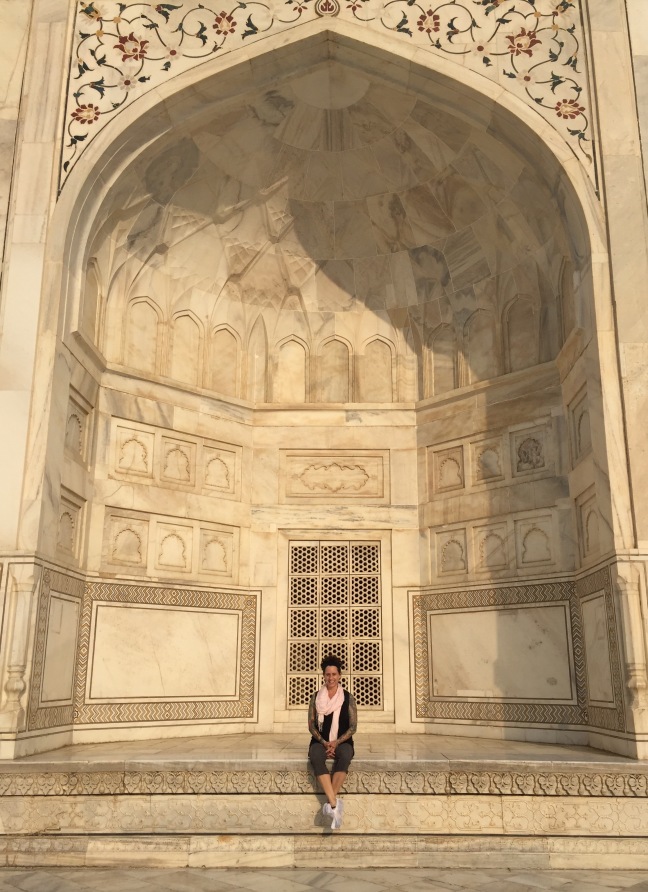 Forget all the facts and figures about how long it took to build the Taj Mahal, the number of people who were involved and the literal tons of different and precious materials that were brought in… you have google for all that. I will encapsulate, however, by saying these facts are staggering in and of themselves, but they are given poetic life when you feel the raised curves of marble flowers under your fingertips and see the multi-colored, inlaid gemstones up close. 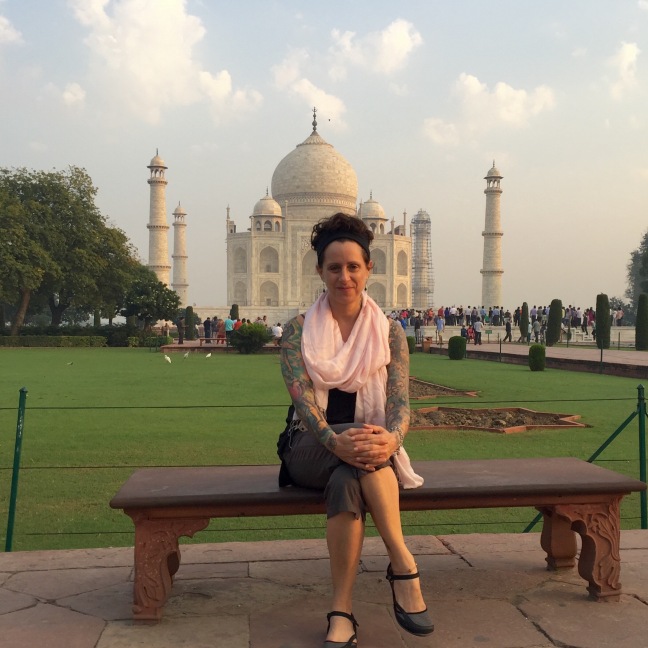 When talking about the Taj Mahal you must also address the astounding symmetry… top to bottom, side to side. From the big-picture, consisting of the recognizable white mausoleum and all its surrounding structures (the mosque, guest quarters, perimeter walls, entrances and gates) and gardens (the lawns, pools, fountains and pedestals) to the small-picture details of patterns, inscriptions and artistry, the symmetrical perfection is blatantly apparent. It’s also beyond impressive considering it was built almost four centuries ago.

If I had to sum up my thoughts and feelings here, there is no doubt that the Taj Mahal is about pure aesthetic… not just visual aesthetic, but the sense of elevated spirit and grace that comes with something this inherently beautiful. Hard labor was a given for this endeavor, but the impetus and the inspiration: pure, deep, undying love… and you feel that from every angle. 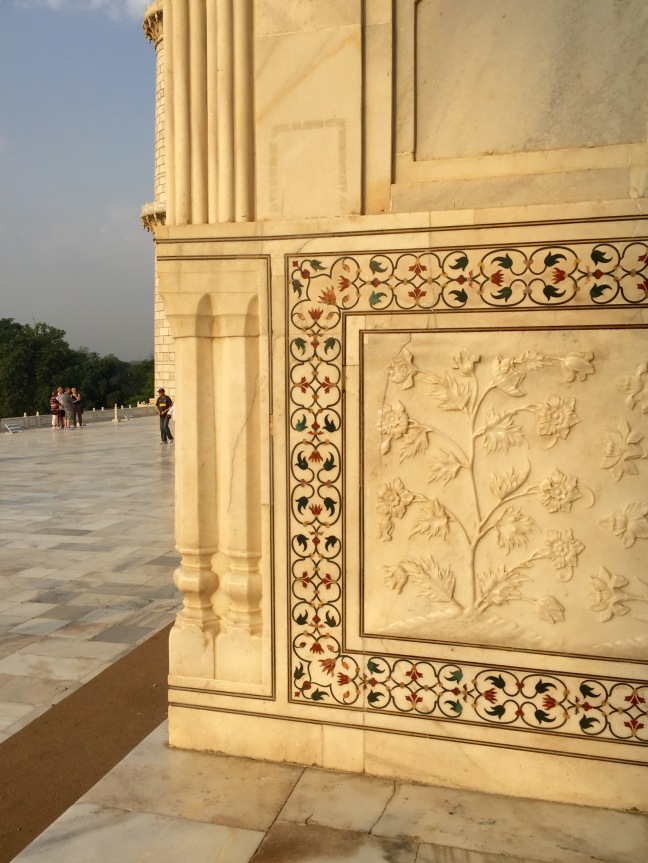 A couple of interesting things to note…

First, one of the corner towers had scaffolding around it, and I was told that they were doing routine maintenance… a cleaning, which consisted of bringing in a particular kind of mud, the same that has been used consistently over the last four centuries, which polishes the marble to highlight its natural beauty but will not scratch, tarnish or stain it in any way.

Secondly, the different decorative colors used everywhere are all precious and semi-precious gemstones that have been carved and embedded into the marble with impressive precision. 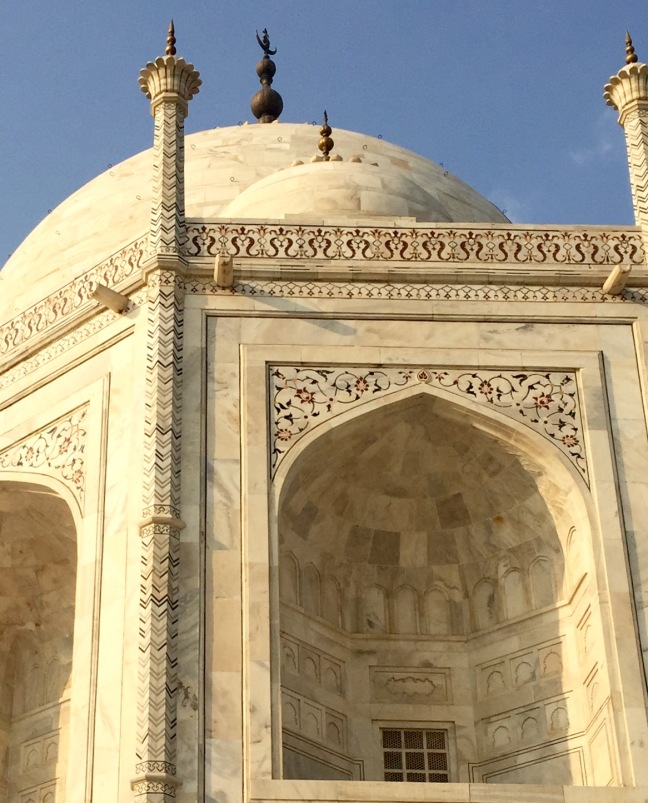 Most of the extremely intricate gem work was inside the inner mausoleum, where photos were unfortunately prohibited, however after leaving the Taj, I had the opportunity to visit a small factory of sorts, where I got to see the artistic process of fixing sliced gems into marble. The age-old technique is purposely kept esoteric and is practiced and preserved only through the lineage of descendants of the original workers… it is not taught to anyone else. Watching these artists craft their intricate work was just unbelievable.

Each skilled at a particular part of the process, one person carves detailed, precision ‘troughs’ into the marble (into marble!) using a sharp steel blade.

Meanwhile, the next person grinds small pieces of gemstone into even smaller, ornate shapes… each piece of stone becomes a leaf or a petal or some other small part of the overall design.

The last person then lays these pieces in a beautiful, colorful pattern that fits perfectly into the pre-carved grooves, so that when you run your hand across the surface you’re barely able to perceive the countless different parts, but instead feel a smooth uniformity of the whole. 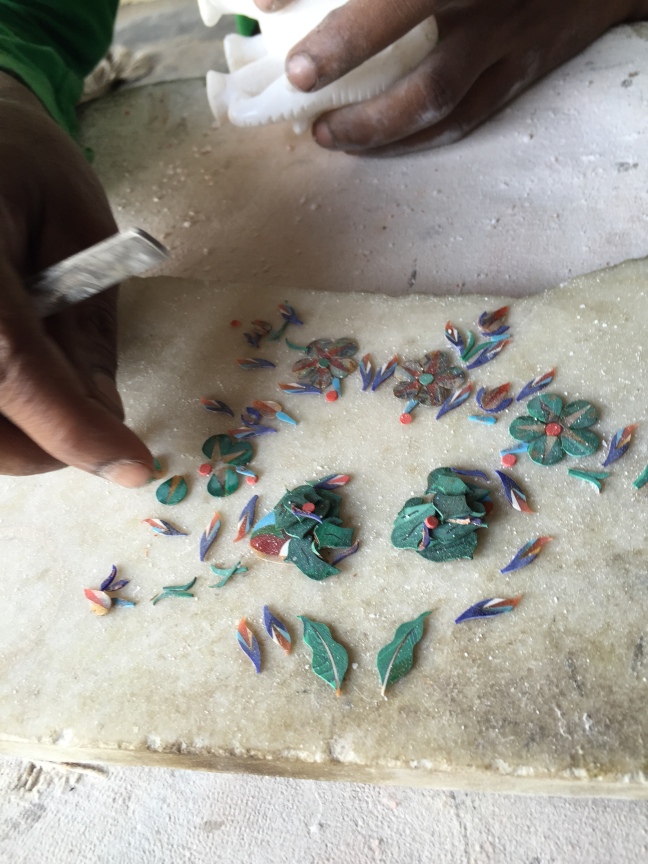 Naturally, at the adjacent store I had to buy a small piece of work (which is why I was brought there, I’m aware) but I cannot tell you how impressive it was to watch this beautiful process happen. There was just no way I could forgo taking some of this home (I am a tourist, after all.)

But what moves this entire thing from the impressive category into the mind-blowing sphere, is thinking back on the vast (and in typical Taj Mahal grandeur, I do mean vast) amount of wall and ceiling space in the mausoleum that was covered with this artwork. I wouldn’t have believed how it all came to fruition if I hadn’t seen it with my own eyes and felt it with my own hands.

There is a reason the Taj Mahal is one of the Seven Wonders of the World… and to think, I had a moment in my planning stages where logistics were becoming tricky and overwhelming, and I contemplated skipping this majestic wonder altogether! Silly girl…

One thought on “The One, The Only…”