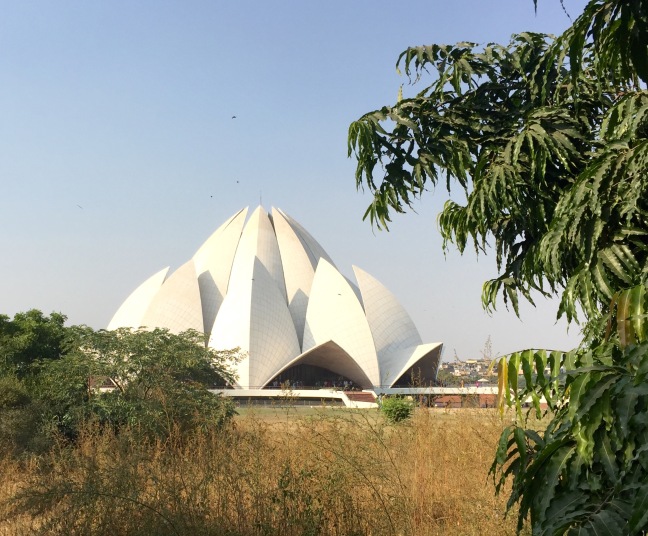 My very first impression of this Capitol city is – it’s so clean! And green! And there are road signs! Yes, there are still a ton of people and the traffic is still insane by US standards, but it’s notably less chaotic than Mumbai… and thank god for that.

I arrived in the afternoon but drove straight away to stay overnight in  Agra for my visit to the Taj Mahal first thing in the morning. Getting back up to Delhi took much longer than normal due to the traffic-stopping, street celebrations of the festival Dussehra so my evening consisted of strolling around the beautiful neighborhood where I stayed, Niazamuddin East, and stumbling across some crumbling ruins.

I hired a driver for my entire time in Delhi, which was a wise investment and considerably decreased a lot of difficult logistics… but getting around on foot is still a tricky and fairly inhibiting affair. Alas, that is, as I’m learning, just India.

My time in Delhi consisted mostly of sight seeing with just a bit of local culture. First stop, Qutub Minar. 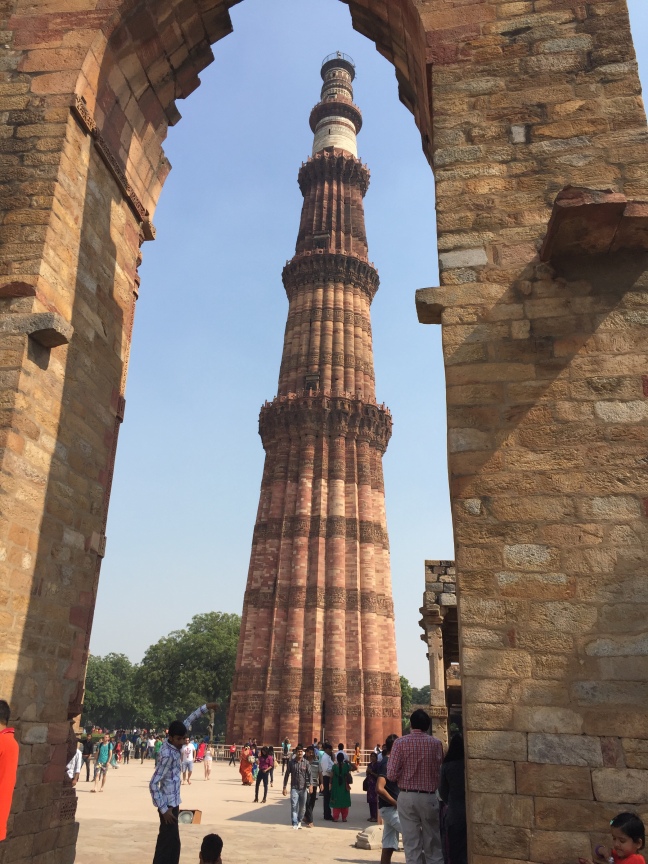 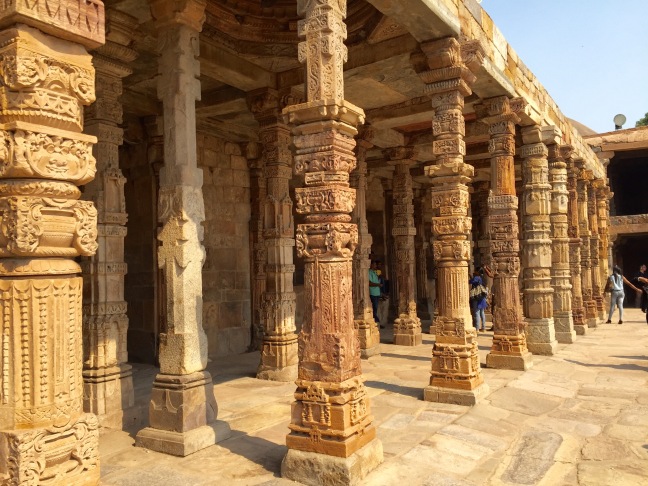 Built in the late 1100’s (these timelines never cease to amaze me) and decorated with verses from the Qur’an, the detail here is unbelievably beautiful. 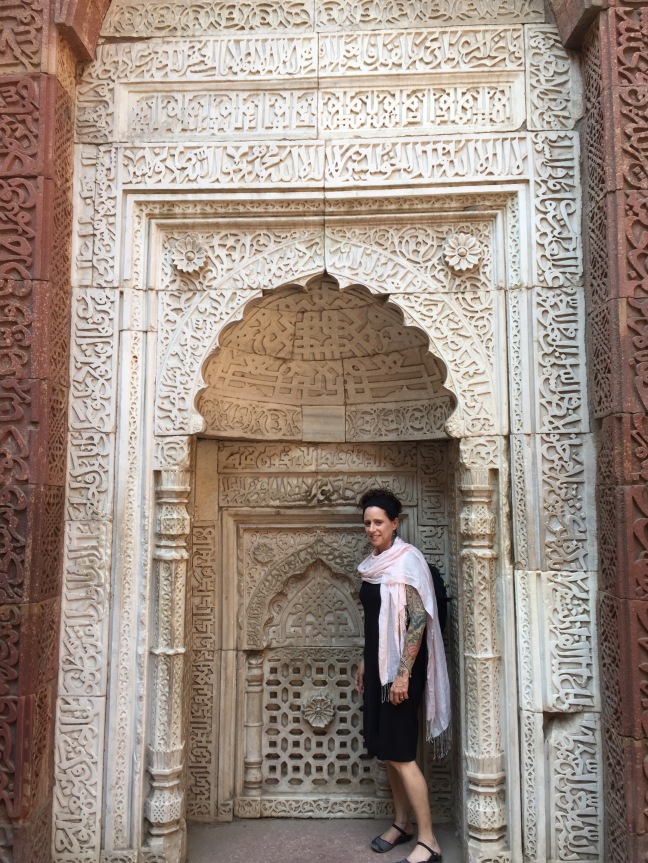 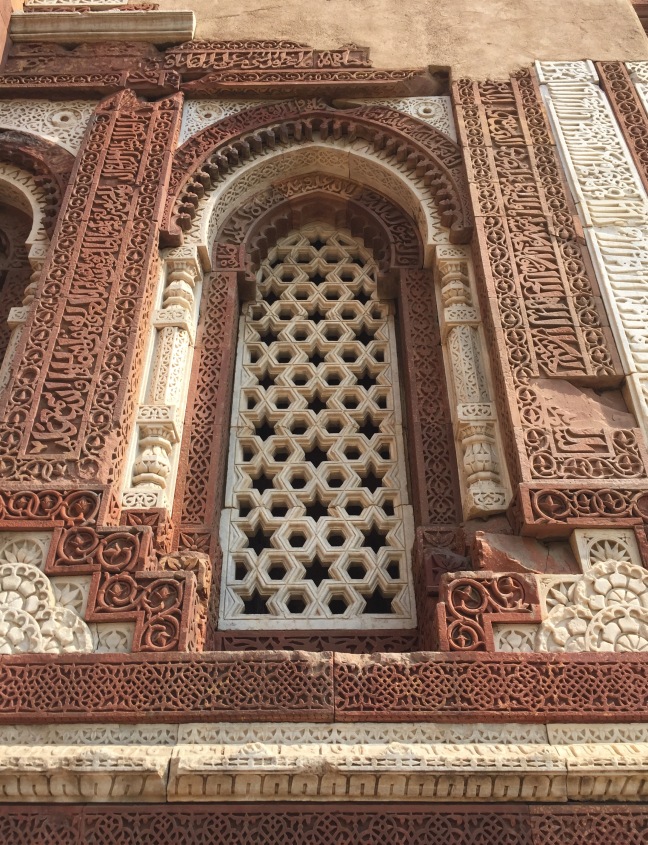 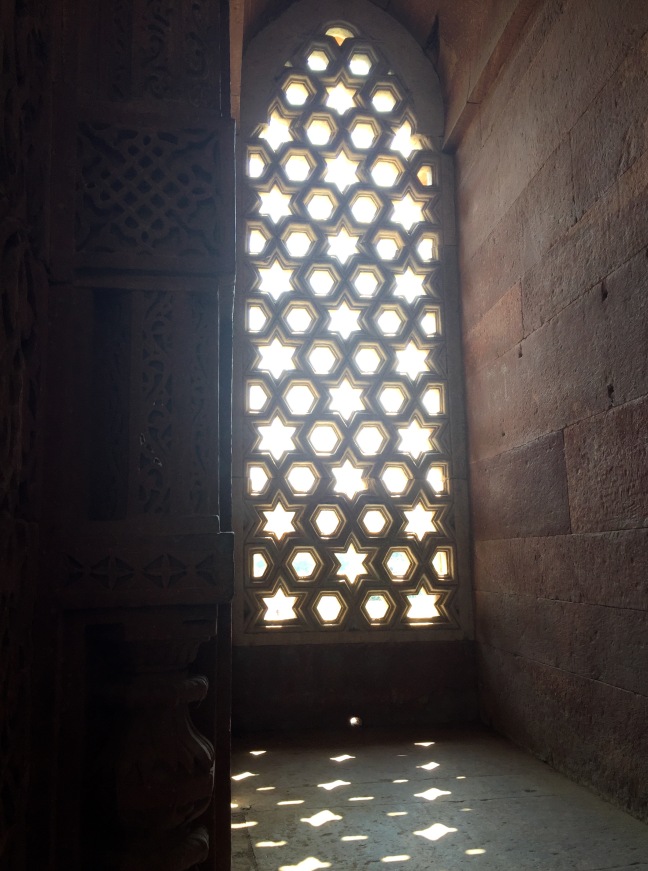 Strangely (and I had read about this before arriving) everyone, particularly at tourist places like this, wants to take a photo of themselves with you. I declined the countless requests from groups of boys and men, but obliged a couple of families. A husband asked me to pose with his wife, so I figured when in Rome (or Delhi, as it were…) and handed him my phone for a photo of my own. 🙂 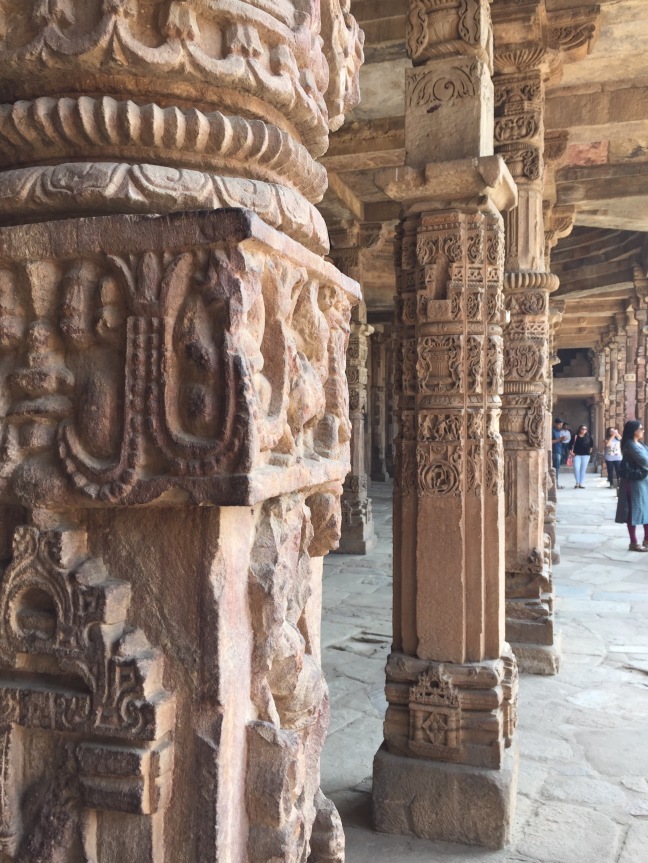 Next stop, Hauz Khas village… a quaint and trendy sort of neighborhood built around the Hauz Khas ruins. The ruins are engaging enough, but the interesting thing here is that they are more of a hang out spot for young people and not much of a tourist attraction. 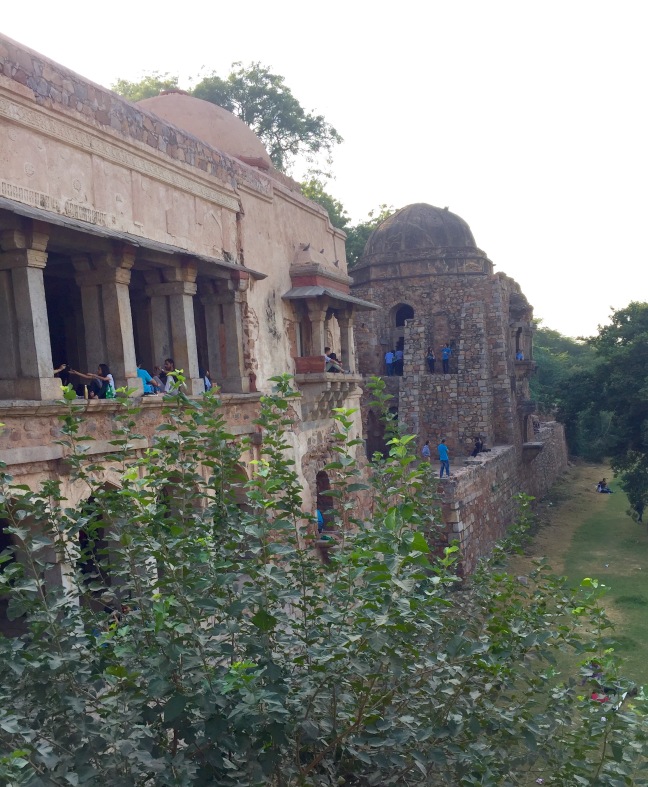 The village itself encroaches right up to the borders of the old complex and walking through the neighborhood was not only cute, but very easy to navigate (that is the first time I’ve uttered those words here in India!).

The streets are narrow so virtually no cars come through, only scooters, adding to the easy appeal. 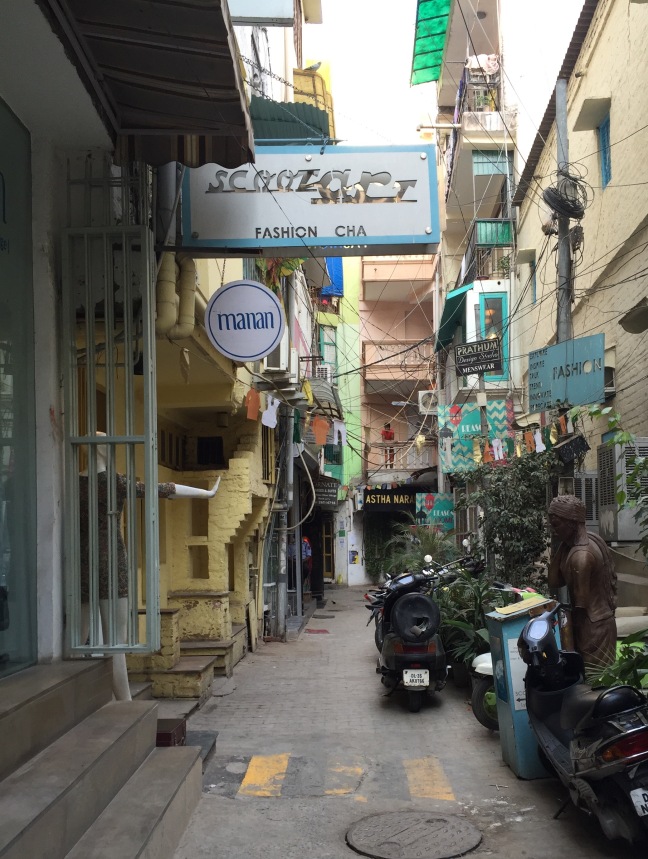 I sought out a relaxing lunch spot overlooking the ruins and Deer Lake… as finding these pockets of calm have become an imperative necessity for me on this trip.

I also got to enjoy some company for a couple of hours, when Raman, my friend Lochan’s cousin, took some time to meet up with me.

We hung out at the Baoli step-well, which is a very cool, antiquated structure (in case you haven’t picked up on this yet, you don’t have travel very far before stumbling upon some building or ruin that is several centuries old) that originally served as a water storage well. 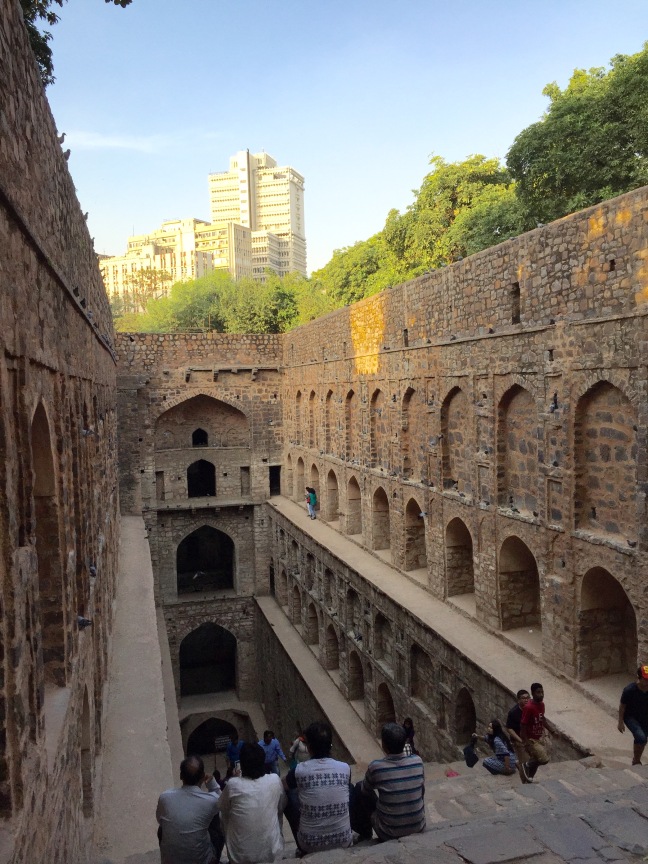 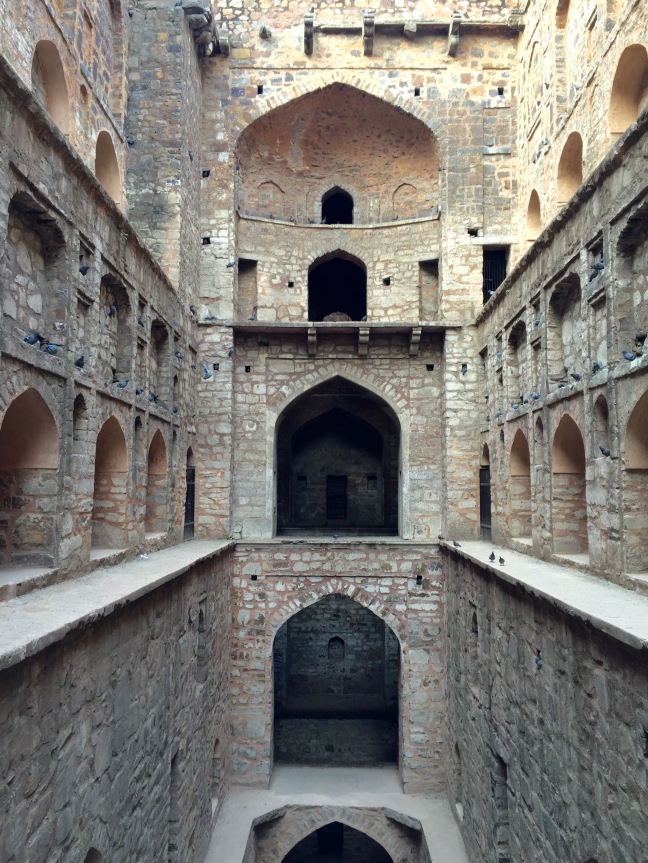 I had wanted to come to this place anyway, so it was ironic that it was here I also got to see some of Raman’s artwork along the surrounding street walls… he is a commissioned graffiti artist who has worked all over the world. 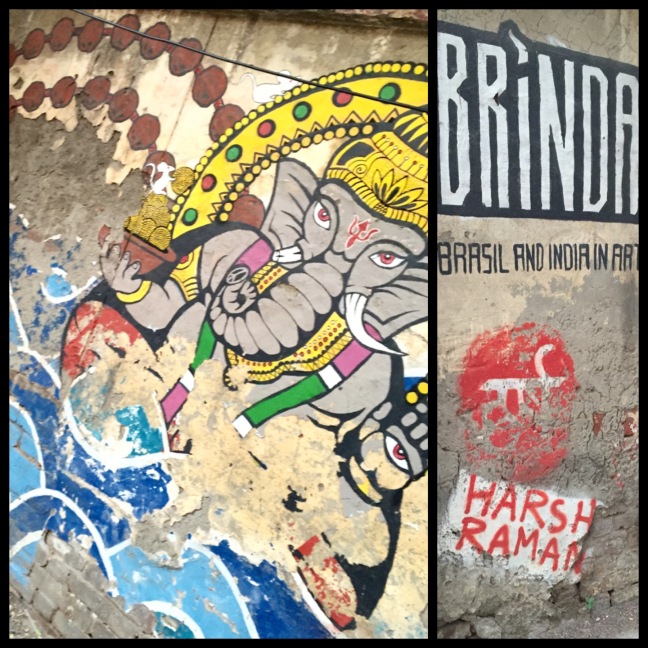 The day ended with evening drinks at a bar in central Connaught Place, overlooking the city.

Day 2
Really, this was only a half day, but I crammed in a fair amount, starting with breakfast and some chai from a local street vendor. Brave, I know.

Then off to Jantar Mantar, a group of vast astronomy structures built in the 1700’s by scientist Jai Singh.

The structures are apparently very precise and although I didn’t understand a lot of what I saw, for a few rupees a self-appointed ‘guide’ gave me some helpful tidbits of information.

From here I went to Gurudwara Bangla Sahib, the stunning Sikh Temple, where I spent quite a bit of time.

Coincidently and luckily for me, my driver is Sikh and wanted to join me, so I was able gain a little more insight from him than if I had just wandered in here on my own. 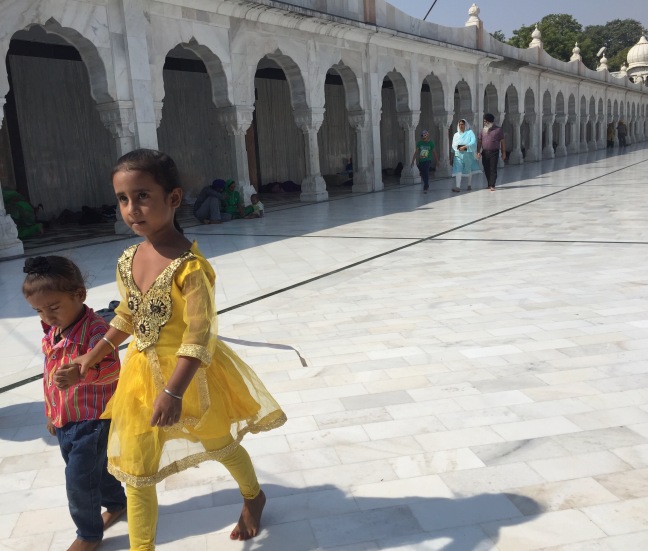 After this I went to a gorgeous Hindu temple where understandably but much to my chagrin, I had to check my camera… my least favorite sign hanging above the entrance: No Photography Allowed.

Inside, the ornate, brightly adorned statues of Hindu gods were everywhere, each with its own alter where offerings have been placed… piles of marigolds and other brightly colored flower petals, intermingled with rice and money.

The walls are adorned in carved out drawings and accompanying scripture… written in both Hindi and English, much of it from the Gita texts which I am familiar with from my yoga studies. I wandered from room to room for some time just trying to take it all in, loving the ornamentation and inherent festive feeling that is the aesthetic of the Hindu worship.

Waiting for my driver to come pick me up, I decided to courageously try one more street snack before heading to the airport, and it was particularly good! It is several hours later as I’m writing this on my way to my next destination, and so far my tummy seems just fine… so a big thank you, to the powers that be (and also, to the Chinese herbs I brought with me, specifically to help prevent any unwanted belly bugs.)

One thought on “Two Days in Delhi”

꧁ Can’t. Get. Enough.
KAP is a direct energy transmission that ignites the divine awakening process within... clearing out old blockages and ushering in higher states of consciousness.
If you had told me a few years back that I would become a vessel of the divine - an enabled instrument that shares and transmits energies which are helping heal the individual while directly raising the collective levels of consciousness on this planet - I would not have believed you.